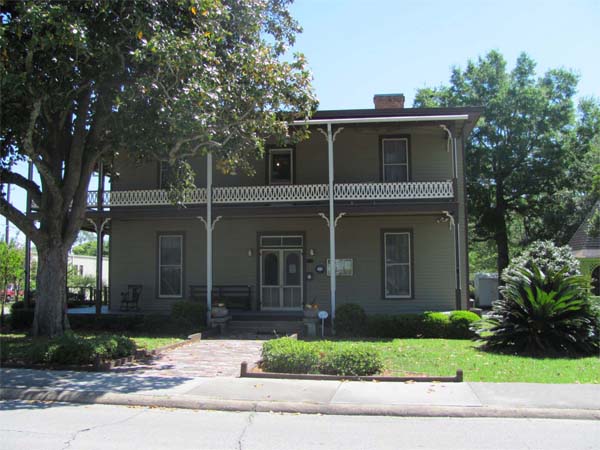 Although the County Courthouse burnt down, destroying many important records that would reveal exact dates, our records indicate that the single story, rear portion of the building existed before the Civil War (1861 or earlier) and that the front, two-story section would have been built around 1880 after Mr. and Mrs. John Vinzant Jr. purchased the property.

The architectural style of the house is “Italianate”, which though not ornate, presents characteristics that are both utilitarian and attractive. Wide porches, tall windows and decorative woodwork are some of what typifies this style of architecture during the 1800’s. The floor plan is essentially a “four square” with the four main rooms downstairs being duplicated upstairs.

The building retains the character of a Victorian residence both outside and in. Renovations have intentionally been made with every effort to preserve the unique qualities of the vintage structure.

The Museum is open to the public Wednesdays 2pm-5pm and Saturdays 10am-1pm. We offer guided tours (by appointment only), genealogical research, and public services via historical re-enactment.

Inside the Museum, the downstairs includes a “Formal Parlor” which is furnished with East Lake settee and chairs much as would have been in use in the late 1800’s. Many of the Vinzant family artifacts are displayed in the parlor. Numerous family pictures adorn the walls and the sewing machine that was used to make much of the girls’ clothing is kept here.

The Blue-Grey room is maintained in appreciation of the tireless efforts of the Blue-Grey Army to keep the Museum in operation since it’s acquisition in the early 1980’s. Without the financial support, in addition to artifact donation and physical labor, the Museum likely would not have become a reality. As the name belies, the Civil War room houses all type of artifacts from the War Between the States. Pictures, diaries, war memorabilia, logs, firearms, swords and books are only a few of the items curated.

The Patriot room adjoins the Civil War collections. Opened in 2009, the Patriot room honors all military personnel from every conflict or war where the American way has been defended. Although still a work in progress, the room already contains quite a collection of items, pictures and documents from most all major wars.

The rear portion of the building is the kitchen which contains miscellaneous items from various eras. An interesting room, the beaded board on the walls and the wide floorboards speak to the 150 years of its existence.

Upstairs would have been four bedrooms. One room is maintained as such and is furnished in Eastlake, a common style for the era. A second room is the Native American room, which presents a colorful glimpse into the life, tools and clothing of various Florida and North American Indian tribes. A model of a Creek village, with Ceremonial Square and other buildings is a prominent feature.

The third room is going to be the Children’s room and is currently “a work in progress”, with the goal being a hands on exhibit of kids’ activities over the past century plus. Additionally a scenic “timeline” of Florida History will hopefully appear.

The fourth bedroom is assigned the mission of “store room”, housing surplus inventory and collections that are not displayed.